You’re working on essays of your target MBA programs for the last three weeks, often struggling for good, punchy lines. Sometimes, you face blank laptop screen, when you can barely write two sentences in thirty minutes. You struggle for words, impactful lines, and, sometimes, even ideas.

Then you come across a sample essay on the internet which has stuff similar to what you want to write. It has great, articulate lines too, and you think your essays will get a touch of class if you use a sentence or two from this essay.

Or it could be just a sentence or two from the school’s website itself.

This seemingly innocuous copy-paste may be treated plagiarism and land you in trouble as it has to several applicants, and sometimes to admitted applicants, in the past.

In 2010, Penn State detected 29 cases of plagiarism ranging from few sentences to full paragraphs from different online sources, including, ironically, a 2009 essay titled Principled Leaders: A Model for the ‘Reset’ Economy. And this was despite signing an honor code before submitting the application. Subsequently, only four were considered to be borderline cases and were asked to rewrite a particular essay; remaining 25 were dropped from the application process, with one after getting admitted.

That’s not an isolated case, though.

In 2011-12, UCLA Anderson rejected 52 applicants in the first two rounds. And in 2012-13 admission cycle, Penn State rejected 48 and UCLA Anderson, 15. And this happened despite a disclosure, at least by Penn State, that essays will be reviewed for plagiarism.

To quote, Craig Hubbell, Director of Operations for MBA admissions at Anderson:

Thus, sometimes you may be unintentionally plagiarizing because of lack of awareness about what constitutes plagiarism.

Not every instance of lack of attribution, though, may lead to rejection of your application. For example, if you’ve used a quote in your essays without attribution, it’s unlikely to be treated as plagiarism. But if you’ve lifted sentences or paragraphs, then it may be.

“If somebody uses a famous quote in an essay, we’re not going to highlight it,” says Ainslie, senior Associate Dean at UCLA Anderson. “When it does occur, it’s because they took a big chunk.”

This wasn’t a coincidence: Boston University essay was published earlier and posted in businessweek.com. As a result, the UCLA applicant was rejected for plagiarism.

Even one sentence can land you in trouble!

What B-schools are doing to check plagiarism?

Plagiarism, though not rampant, exists in some levels. UCLA has found that 2% of its MBA applicants indulge in plagiarism, whereas Penn State reports 8%.

But, given zero tolerance of B-schools toward unethical behavior, they’ve increasingly adopted Turnitin’s anti-plagiarism software to check the menace of plagiarism as it’s impossible to do it manually. Turnitin’s software checks an applicant’s essays with billions of web pages, hundreds of millions of archived student papers including essays submitted by students in the past, and hundreds of millions of journals, periodicals, and books. On finding a match, it flags off the particular section of the essay next to the possible source. And it’s then left to the discretion of the school to decide whether the plagiarism was a false positive, minor, or major, and take decision accordingly.

(Zero tolerance toward plagiarism has had an added advantage for both UCLA and Penn State: cases of plagiarism on even class assignments dropped from few a year to none after they started using Turnitin.)

How you can avoid plagiarism?

1. Massive amount of free material on the internet makes it tempting for applicants to lift few sentences or paragraphs from here and there, believing that such small indiscretion will not be noticed. But, with Turnitin’s massive web and non-web database, it can be.

So, if you plan to take help from free or paid model essays available on the web or in physical form, then use them strictly for inspiration. Don’t use text from there verbatim in your essays. In fact, this is the most common source of plagiarism: According to Craig Hubbell, Director of Operations for MBA admissions at Anderson, most of the plagiarism they came across involved lifting of passages from essay websites.

2. Don’t lift sentences or parts thereof from the school’s website. Even that is noticed.

3. Don’t use anything from your friend’s essays who applied to B-schools three years back even if the schools he applied to are different from yours and the essays are not in public domain. Read this:

In all likelihood, your friend’s essays will be part of Turnitin’s database.

4. Don’t be tempted to get your essays written or edited through unscrupulous admission consultants, who may copy-paste some of the portions from essays of their clients applying to the same school (some of the school-specific stuff could be overlapping). In the end, you may never know why you were dinged.

Read this from UCLA:

5. In case your essays have been edited by someone, copy-paste paragraphs or the entire essay onto Google and search it. You can detect possible plagiarism this way at least if the stuff has been lifted from the web. Though it’ll not work if access is restricted (for example, if it’s paid) to such material.

6. If you can’t help using some portions of someone else’s work, then attribute it, preferably, in the footer.

7. Avoid writing immediately after reading something that has inspired you. Take a break of at least few hours before you start writing. This way, you are much less likely to repeat what you read.

Time for some fun now

To quote Craig Hubbell, director of operations for MBA admissions at Anderson: 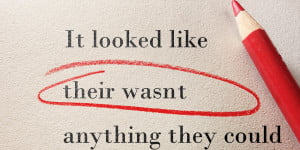 How Accommodative Are MBA Programs of Your Sub-Par English in Essays?